What is it and how it is made

The technique of applying thin sheets of precious wood, such as walnut, to another cheaper wood, was already known to ancient Egyptians, Greeks and Romans: veneering as a parsimonious method of working.

Inlay was also used by very ancient civilizations, and inlay woodwork resumed in Italy in the fifteenth century; wood was cut out where the inlay was to be inserted, and various wooden pieces in other colors were slotted in to form the desired design. From Italy, the Renaissance techniques for creating antique inlaid furniture spread throughout Europe.

In the seventeenth and eighteenth centuries the wood was cut into veneer varying between 3 and 6 mm in thickness using primitive means and wasteing a lot of material. The cutting of the veneer can be done along the medullary rays, and in this case you obtain the 'rigatino' design; if tangential to the circumference you obtain the 'flame', and near branches or roots you obtain 'roots'. There are also other methods.

The modern technique know as inlay is in fact marquetry, which, unlike inlay, which was embedded in solid wood, is a slab made up of different woods, sometimes coupled with materials such as ivory, tortoiseshell, mother of pearl, pewter, brass and copper combined as a puzzle to create decorative elements. Veneers of different types and colors were usually superimposed on top of each other forming several layers; the design to be executed was pasted onto the first sheet and then cut.

With this method, it was possible to cut several layers in a fairly precise way, then to assemble them like a puzzle in the processing of antique inlaid furniture. 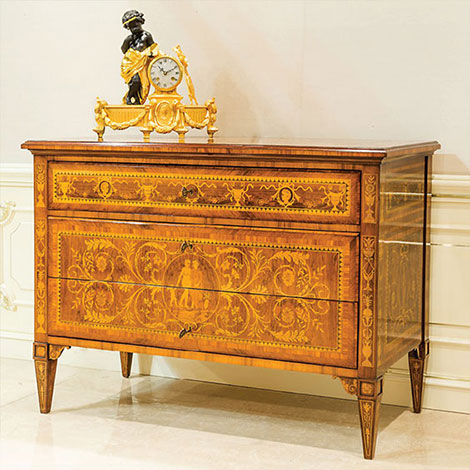 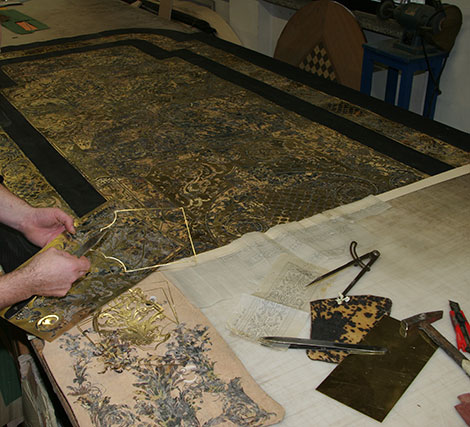 An important evolution in cutting was produced by the hacksaw, whose blade mounted on a rigid structure allowed greater precision, minimizing cracks due to cutting. After cutting the veneers were separated with a thin knife, each inlay was chosen in one layer, then the various different colored inlays obtained from the cut were assembled to form the geometric shapes or designs that they wanted to create.

The wood was then shaded by placing it in hot sand or blackening it with a hot iron, thus assuming shadows that gave the veneer depth and movement.

At the end of the sixteenth century, with the evolution of inlay and the search for new colors, they began to dye wood. Vasari attributes the origins of this technique to Giovanni of Verona, other historians to the Canozzi brothers of Lendinara around 1642.

The colorful inlays greatly in vogue in the 1700s were created mainly by the great French cabinetmakers; according to others, in Italy Giuseppe Maggiolini used as many as eighty-six different types of wood.

Since inlay and marquetry often represented figurative scenes, naturalistic motifs and architectural views in realistic ways, it was necessary to know the rules of perspective. Antique inlaid furniture was comparable to framed paintings during the period, with designs produced by famous painters which were very detailed and precise.

The construction of inlaid antique furniture varied in popularity, depending on the historical period. In Empire periods, Charles X and Luigi Filippo furniture, although rich in very important veneers, had little or no inlay.

Nowadays, with this ancient technique it is possible to restore or make copies of antique furniture of the great cabinetmakers, such as Boulle or Maggiolini.

Now furniture is created that recalls certain historical periods, and inlays (often geometric) are created for modern and contemporary furniture, even though modern culture favors "fake" ecological materials such as colored laminates derived from plastic.